Italians let their hair down as coronavirus restrictions eased

To get a haircut by Antonino di Maggio, you face at least a two-week wait. And when you do arrive for your appointment, you had better be on time.

The 58-year-old hairdresser in the Italian city of Palermo has 200 scheduled appointments since reopening the doors of his salon on Monday, after more than two months in lockdown.

Di Maggio’s business was among the many permitted to serve customers again, alongside restaurants, cafes and clothing shops.

But there are some changes – chats, magazine browsing and last-minute drop-ins are not allowed.

Clients have to book in advance and be seated at a two-metre (6.6 feet) distance from each other. Employees must wear a face mask and sanitise seats and tools between appointments.

Personal objects have to be put in plastic bags at the entrance, and capes must be cleaned for a minimum of 30 minutes at 60 degrees Celcius (140 Fahrenheit).

“The workflow is great. There is no crowd, the ambience is clean, and people finally have to be punctual,” said di Maggio. “We work longer hours to keep the same number of clients. So far, I can only see improvements”.

His salon, named Joshua, will have to respect these new ways for months to come.

By allowing businesses to reopen gradually, the government is trying to revive the economy without triggering a second wave of infections.

The caution is necessary.

Italy has paid one of the highest prices of the global pandemic with more than 32,000 deaths and about 225,000 infected.

“Just a month ago, we saw army trucks escorting coffins in Bergamo, and while the curve is flattening, I can still hear the rumours of ambulance sirens,” said Alessandro Lisi, 45, owner of the Area#6 hair salon in Milan.

He has decided against reopening the salon for now, but will start cutting hair again on June 3.

“This freedom is coming too fast, I prefer to move with caution,” he said, despite his phone “burning” with appointment requests.

But he said he wants to treat his clients’ health with the same level of dedication as their hair.

“So, I’ll wait until we have more clarity over the health situation,” he said.

Italians, whose lives will still be dictated by distancing rules, are now having to accept a new normal, one of drastically reduced activity.

Economic growth is estimated to drop by 8 percent this year, according to government figures.

“This crisis is dangerous as the most vulnerable will pay for it – such as workers with temporary jobs or without a welfare state, the already poorer southern regions compared to the richer in the north, and small activities which are destined to disappear,” said Terribile.

The current crisis has hit the tertiary sector, she added, which includes culture, tourism and catering.

This means it cannot play its role as a “workforce sponge”, by absorbing unemployed people.

The Italian government issued two substantial economic relief packages since the beginning of the outbreak, and Germany and France called on Monday for a recovery fund worth 500 billion euros ($543bn) for the worst-hit European Union countries.

But, said Terribile, a question remains – how can Italy, which suffers from a “lethal bureaucratic system” deliver these funds to those in need?

Sandro Silvestri, the 61-year-old owner of Augusto, a trattoria in Trastevere, a central Roman neighbourhood usually packed with tourists, had to lay off four of seven employees.

None of them has yet received government-issued redundancy funds, which should amount to 80 percent of the salary. 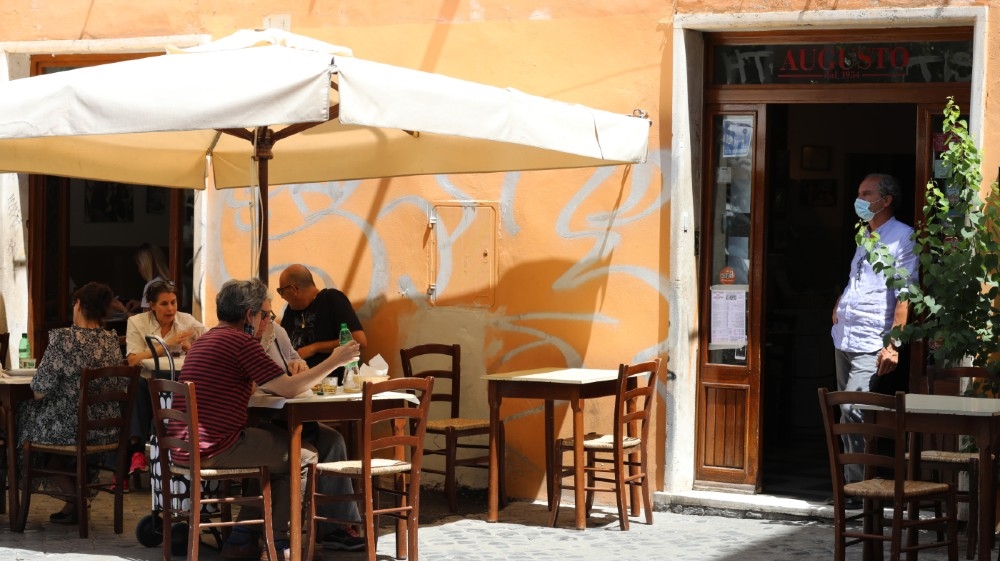 Sandro Silvestri, the owner of Trattoria da Augusto in Trastevere, stands at the door to observe customers after more than two months of a nationwide lockdown [Marco Di Lauro/Getty Images]

“I am depressed, such anguish and such an apocalyptic atmosphere,” said Silvestri as he counted 10 clients in the restaurant which used to serve 60 at this time last year.

Tourism in Italy accounts for 12 percent of the GDP.

Silvestri hopes that when regional and national borders for EU countries are reopened on June 3, the situation will improve.

But more tourists and an eased lockdown might not be enough to prop up the economy, as much depends on how willing Italians are to resume normal life and start spending as normal.

Uncertainty over the future remains high with no vaccine in sight and fears of another outbreak, a scenario which will weigh on people’s purchasing power, said Terribile.

“There are some concerns given how the virus is still circulating,” health ministry spokesperson Nicola Del Duce told Al Jazeera.

However, he added: “The experience has taught us a lot, and today, we are better equipped to prevent the virus from degenerating.”

As the careful journey back to normality continues, Italians have few options but to wait and see how their new reality progresses.

In the meantime, they can get a new haircut.

Valeriano Seminara has transformed his Brush Square hair salon in the centre of Milan to include more stations, changed the colours of his wall from black to white and rolled out a green grass-like carpet at the entrance.

“I expect a lot of request for short haircuts,” he said, “and luminous dye colours. Lightness and brightness, this is what people are looking for.”

As some attempt to limit teachings about racism and schools’ diversity efforts are met with protests, reports of racist bullying have surfaced

Students of color are facing racial slurs and bullying in and outside the classroom, and many who are fed up...

Back in mid-November, when the Oregon Ducks still had eyes set on a possible national title push, some very influential...

Antonio Brown’s future with the Tampa Bay Buccaneers is reportedly up in the air after the veteran wide receiver violated...

Watch some of Dole’s most memorable moments

Former Republican Senator and presidential candidate Bob Dole has died, according to a statement released by his family. "Senator Robert...

The US and China: Avoiding a meltdown